Carlton is 20 years old from Birtley, County Durham, and came to the Port straight out of school. He is now in his final year of a four-year long apprenticeship. He has already achieved his BTEC Level 3, and is now working towards his HNC in Electrical Engineering.

What inspired you to pursue an apprenticeship?

I wanted to do something that involved study and practical training. I was invited to tour the Port and after doing the 5-day bootcamp and meeting the mentors, I knew it would be a great environment to train as an Apprentice Electrical Engineer.

What's day to day life like as an Apprentice at the Port?

It's a cliché but every day is so different at the Port, which has really given me the chance to get to grips with all aspects of electrical engineering. From the variety of sites to a wide array of plant and equipment - it has put me in the best position for starting my career.

What sort of projects have you worked on at the Port?

I've been involved in many projects and am currently the Port's maintenance specialist in mobile plant monitoring equipment. I have been able to work on some major projects, including converting a conveyor system and maintaining the famous Swing Bridge in Newcastle!

What has been your best moment at the Port?

In the 2017 peer nominated awards, I was selected for the Unsung Hero award - it was a great moment being recognised by the wider Port community for quickly understanding the Port of Tyne's can-do culture! 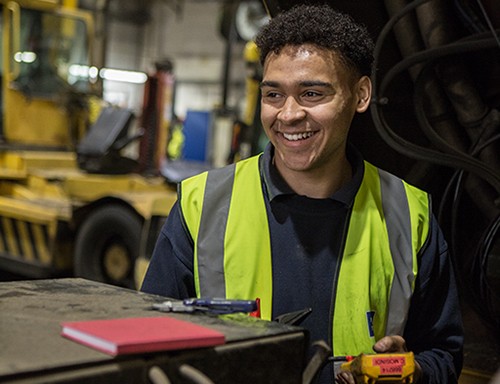 "It has been a pleasure watching Carlton grow and learn, which has enabled him to become a valued member of the team!"