THE CHALLENGE: EPH acquired Lynemouth Power Limited from RWE and decided to convert Lynemouth Power Station from coal-fired to run on biomass, committing to a US$400m investment. The power station will burn up to 1.8m tonnes of wood pellet per year to generate 420MW of electricity, enough power for 450,000 homes, with the wood pellet being sustainably sourced from Canada, the US and Europe.

THE SOLUTION: The Port of Tyne and LPL worked in partnership to create a £38m innovative and sustainable biomass facility, through which the wood pellet is unloaded, handled, stored and transported to the power station. The Port financed a 125-metre quay extension, rail infrastructure and two new ecohoppers; LPL paid for three storage silos with total 75,000 tonnes capacity, 1,364 metres of enclosed connecting conveyors and a rapid rail loader.

THE OUTCOME: Wood pellets are offloaded mechanically to the new silos and discharged via conveyors to be taken to Lynemouth Power Station by train. As the largest handler of wood pellet in Europe, the Port of Tyne is recognised for its expertise in this sector, having handled wood pellet since 2009. The Port is handling 100% of LPL’s feedstock – a clear demonstration of confidence in its services. 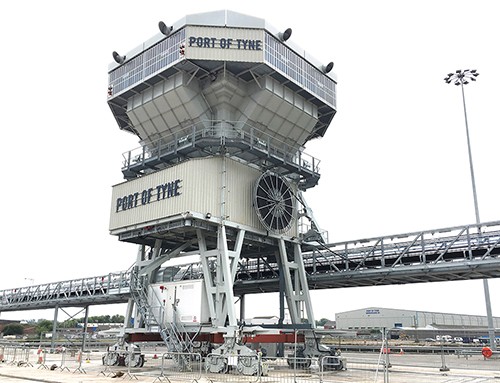 "Right from the start, as soon as we expressed our interest, the Port of Tyne has been very supportive in getting the project up and running. What has been built at the port is staggering."